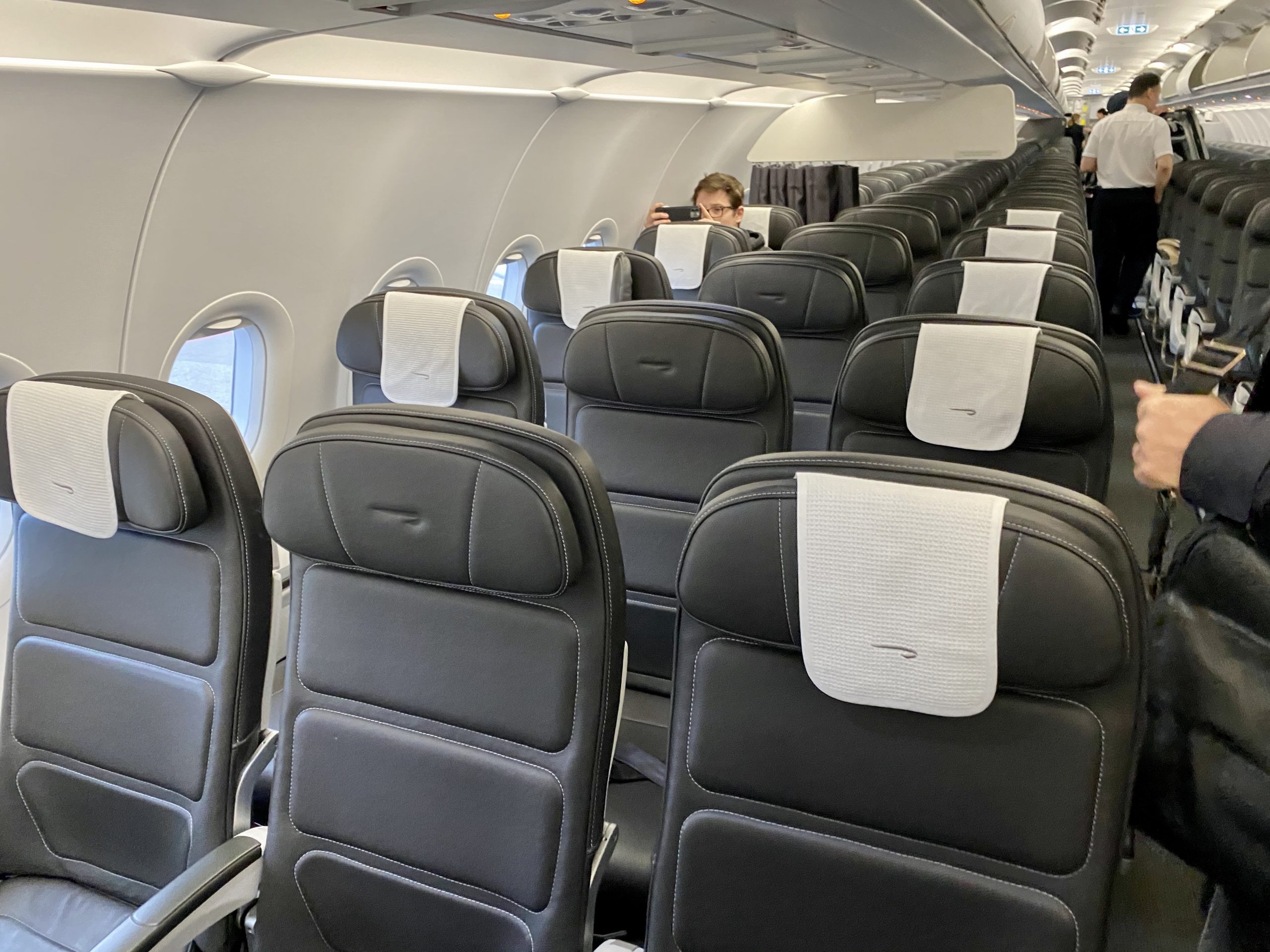 Having flown over to Amsterdam with British Airways on an A321neo in economy yesterday, I was looking forward to a comparison with today’s flight on another member of the Airbus family, an A320, but this time in Club Europe, BA’s short haul business class product. The hop between Amsterdam and London is actually one of BA’s shortest flights, which makes it very difficult for the crew to provide a full service, so it would be interesting to see how they cope.

This flight was booked as part of a longer trip that would take us all the way to Hawaii in business class. Hawaii used to be the holy grail of British Airways tier point runners as there were some ridiculously cheap fares out of Europe that, in the early days, saw many people reach One World Emerald status for less than £1,000. Those glory days are unfortunately behind us, thanks to a weak pound and increased oil prices, but a good fare, at least by today’s standards, popped up at the end of November for just £1,500 each so I called BA and booked 4 seats for a Christmas trip for us and our friends. The outbound routing for this trip takes us from Amsterdam to London, New York, Los Angeles and, finally, Honolulu. We could have flown direct between London and Los Angeles, but going via new York means we earn 280 tier points for those two sectors, instead of the 140 we would have earned had we done it as a single flight.

As I paid for the flights with my British Airways American Express Premium Plus card, I earned 18,000 Avios. In addition, the flights will earn us around 48,000 Avios each. I use Avios mostly on short haul flights, particularly last minute domestics, often saving hundreds of pounds per flight, so I tend to value you them higher than most, at around 4p each. However, even valuing them at a conservative 2p, this trip would return around £1,000 each in Avios, making an already good deal even better value.

We left the British Airways lounge in Schiphol Airport at 9.30 for our 10.05 flight, knowing that we had quite a long walk ahead of us; all the way to gate D28, a couple of gates down from where we arrived into the previous evening.

We arrived at the gate at 9.40, just as boarding was about to start. Boarding in Amsterdam is generally well controlled, with individual groups called forward, based on cabin and status.

We headed around the crowds, joined the back of the group 1 queue and were quickly through the boarding pass and passport check.

As we walked down the gangway, we could see our plane, an 11 year old Airbus A320, waiting for us.

With not too many people in front of us, we didn’t have to wait long to board.

Having booked this trip a few weeks before Christmas, I was expecting the flight to be quite busy, but I was surprised to see from the seat map that the Club Europe cabin was almost full. In fact, the only two seats left together were in row 7! I’ve never sat that far back in Club Europe…

We quickly arrived at our seats and they were pretty much identical to the economy seats we had on the outbound flight.

While this particular aircraft was not one of the latest A320neo models, it was fitted with British Airways’ latest densified cabin, with 180 seats. Like the A321neo we flew over on yesterday, there are two different seat types on board.

The first 12 rows of the cabin are fitted with the Rockwell Collins Pinnacle seat, pictured below, with 30″ of pitch. This is just about acceptable in economy, but definitely feels too cramped in business class . While I like the seat and find it quite comfortable, I would like more legroom in what is supposed to be a premium cabin.

Another disappointing aspect of this new configuration is the lack of the table over the middle seats that was in the older cabin. While the middle seat is still kept free in Club Europe cbin, it is pretty much useless without a table over it. In the previous cabin configuration, still in use on some aircraft, I found the table particularly useful for sitting drinks, or even my iPad, on when the seat back table was taken up by the meal tray.

The seats in rows 13-30 are far worse, but that’s a conversation for another review!

One good aspect of this configuration is that British Airways has finally fitted power at each seat. Rows 1-12 on this aircraft have a plug socket and a USB port below each seat, while the remaining seats have a USB port.

During take off and landing the power is switched off and the LED on the plug glows red. Once airborne the crew are supposed to switch the power on and the light changes to green. I haven’t yet, however, been on a flight where the crew have remembered to do this. I’ve had to ask every time and this flight was no exception. I’m sure it’s one of those things they’ll eventually get used to…

There are air vents and lights above each seat, but, like the A321neo, the 320s have had their moving map and video screens removed to save weight, so safety demonstrations are done manually.

Storage in the upper part of the seat back is taken up by in-flight magazines and is pretty much useless for anything else as it’s so slim. At least you can use the middle seat to dump things on, I guess.

Essentially, this cabin is pretty much identical to that of the A321neo we flew on yesterday. The same is currently being rolled out across the majority of BA’s short haul Airbus fleet in order to standardise cabins and take advantage of economies of scale.Unfortunately, as business class cabins go, it’s definitely a step down in terms of comfort. One good thing, assuming you have status, is that BA restricts the front row on these planes to BA Gold / Oneworld Emerald members. If you have status and can book it, the front row is definitely the most comfortable place to sit.

With an expected flight time of just 45 minutes, in flight service started very quickly after take off with hot towels being handed out. The in-flight meal took a while to reach us back at row 7, although the crew were very efficient. Having mixed my times up, I was expecting a cooked breakfast on this flight so I was disappointed when I received a soggy spring roll.

On a more positive note, food in Club Europe varies by route and length of flight and it definitely does get better than this. It’s worth noting that British Airways serves food from the front of the cabin to the back on these flights, so you have a higher chance of getting your first choice if you sit further forward.

British Airways also serves a full range of complimentary drinks in Club Europe, including wine, champagne (served in individual bottles on shorter routes), spirits, beer and soft drinks. Still trying to remain on my best behaviour, I had a cup of coffee with my meal and then settled back to enjoy the scenery. It was a beautiful day and the views were incredible!

Due to air traffic control restrictions, we were held in a pattern outside London for almost 30 minutes so it ended up being a much longer flight than expected, but we were rewarded with stunning views over the City on our approach.

This aircraft was not fitted with wifi so I was unable to review it on this flight.

We crossed London from east to west and touched down into Heathrow at 10.10, still ahead of schedule despite the delays en route, and taxied to stand at Terminal 5A.

With just a couple of hours until we would be boarding our New York flight, we quickly deplaned and headed to Flight Connections.

Competition in the airline market has clearly led to cost cutting and it shows on these flights. Club Europe is now far from a premium product and has actually dropped below the level of domestic economy from a little over ten years ago, where meals, often hot, were served to all passengers, even on domestic flights, and there was enough seat pitch to stretch out and open your laptop. That being said, the cabin is still quieter up front and the empty middle seat gives a feeling of space, which may be missing further back. I can’t deny that it’s nice to have something to eat and drink on board.

Whether I would actually pay for Club Europe these days very much depends on the price. If you can get an exit row seat in economy, it’s often more comfortable and the money saved can be spent on a nice meal at your destination. If, however, you’re chasing status and need the tier points, it’s a cheap way to earn them if the price isn’t much higher than economy. It can also be good value as a last minute Avios redemption. I’ve seen Club Europe domestic flights for £400+ that have had Avios availability, with a cash component from as low as 1p.

However you decide to pay for it, just keep your expectations low or you may be disappointed.