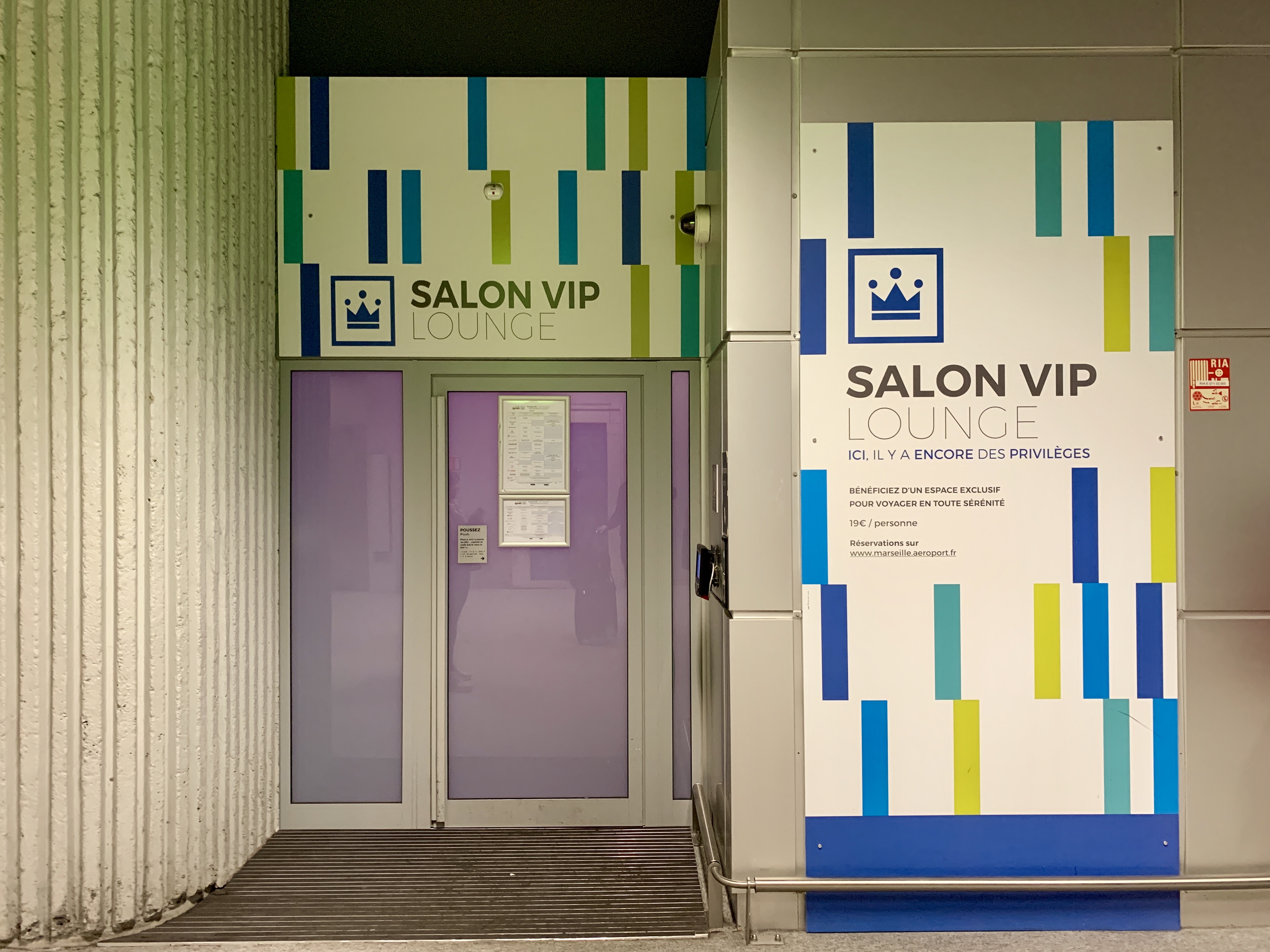 Well, so much for my sense of direction! Driving back to Marseille’s Marignane airport, I stopped for fuel, got back on the autoroute and somehow managed to missed my exit. Fine, I thought. I’ll take the next one. It can’t be far. Turns out it was 35 miles up the road and on a toll section! Luckily I managed to find a way to turn round at the next toll barrier without going through. I then just played the dumb Brit when I got back to the original toll and the woman let me through the barrier for free. Phew! Still, with 45 minutes wasted, we turned up at the airport 75 minutes before our take off time, which is fine when you want to just get on the plane, but I was hoping to check out the lounge. Luckily our flight left from a very quiet terminal 1. With the hire care drop off point right outside the terminal and no queues at check in, security or passport control, we were at the lounge entrance in less than 10 minutes.

British Airways uses the Salon VIP lounge in Marignane’s Terminal 1. The lounge entrance is located just after passport control and it’s fairly hard to miss. From the outside it’s not exactly the prettiest looking lounge. In fact, it looks like it’s still under construction, but it is certainly obvious.

Access to the lounge is via barcode scanner, under which you wave your boarding pass to confirm access. Needless to say, it didn’t work. We tried the door a couple of times and eventually somebody came out of the lounge to check our boarding passes. While we were clearly allowed in, they still wouldn’t scan. The chap tapped some things into an iPad, re-scanned our boarding passes and finally they worked. We were in!

To access the lounge, you must be on a Oneworld flight and belong to at least one of the following groups –

Okay, that’s the boring bits out of the way. Now let’s go inside and take a look around. As you enter the reception desk is on the right. The first thing you notice are the garish neon lights.

Initial impressions are pretty good. Just inside the lounge is a table with lots of jars stocked with sweets and snacks. There was also some cake on a tray, although I’ve no idea why.

To the left there is a magazine rack with some decent magazines, but they are labeled for reading solely within the lounge.

On the wall directly opposite the entrance there are some raised seats with partitioned areas for working and plug sockets under the desks.

To the left is the main seating area featuring, somewhat bizarrely, a tree.

The lounge is basically one square room with around 50 seats. Unfortunately there are no views as there is a plastic covering over the windows.

The seats are pretty basic, with no cushions, but are comfortable enough.

Each table has a power brick built into the floor with three power sockets, which is very useful.

While nothing special, the lounge is just about acceptable as a place to spend an hour or two waiting on a flight. It’s a bit bland but it’s better than waiting by the gate and the availability of so many power points is a bonus.

So, the layout of the lounge is okay, if uninspiring, but what about the food? Well, this is where it all goes wrong.

To the left as you enter the lounge there is a small pantry area with a fridge containing some snacks and drinks. On the surface it looks okay, until you dive in and actually sample the food.

The bread on the pitiful selection of sandwiches left out was extremely hard. It felt like they had been in there for days. They should have gone in the bin hours ago.

The meat and cheese selection was also incredibly dry and very unappetising.

The only thing that looked vaguely edible was the pre-packed cheese.

Even the fruit was dried out and unappealing.

There were a few yoghurts, which I’m sure would have been fine, but certainly nothing that could remotely be construed as a meal.

Drinks-wise, there was an empty bottle of red wine on the shelf.

There were a couple of bottles of white and rose wine in the fridge, along with some bottles of water.

Soft drinks include Pepsi, Seven Up and iced tea, as well as some concentrated fruit juices and that’s pretty much it.

The table near the entrance contained a selection of sweet treats, which was nice, but not really what we were after at dinner time.

There was a small soup barrel containing fish soup, but it was empty.

The coffee machine with Nespresso capsules was about the best thing in there.

As pitiful as the food and drink was in this lounge, this is the part that disturbed me the most – croissants and pain aux chocolats were already sitting out, ready for breakfast and open to the elements, 12 hours ahead of the lounge opening time. Not only are they likely be dry and stale by the morning, but with the lounge full of passengers the night before, this did not seem very hygienic. I would have expected them to be covered, at the very least.

Okay, rant over. I guess my point overall is that the catering in the lounge was incredibly poor. In fact, possibly the first I’ve ever experienced in a British Airways lounge.

Business facilities are limited to the high tables near the entrance. There are no computers or printers, which is fine in a satellite lounge. Each of the tables has two sockets underneath, which is very useful.

I didn’t use the toilets while I was there, but there are facilities within the lounge. There are, however, no showers.

There is no sleeping area in the lounge.

This lounge was easy to find and I like how close it is to the gate. I was also impressed by the number of plug sockets available, which is something British Airways is often criticised for, particularly in Heathrow lounges. However, overall, both Danielle and I were disappointed by the lounge. As somewhere to spend an hour before a flight, it’s reasonable but the food and beverage offerings are far below the standard I’d expect from a British Airways lounge.